Recently, Major League Baseball revealed plans to put a ban on home plate collisions. According to the results of recent research, banning these collisions may help protect players from serious injuries, some of which require orthopedic surgery.

The study was published by two researchers from Wake Forest University in the International Journal of Sports Medicine. This study compared the number of injuries per play for different types of plays. The researchers discovered that an average of seven injuries occurred for every 1,000 tag outs on home plate. For plays involving throws from the outfield to second or third base, the average number of injuries was only 1.5 per 1,000 plays. 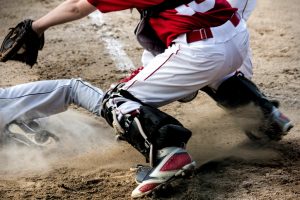 Based on this data, researchers determined that plays at home plate raised the risk of injury by more than four times. In these incidents, injuries were slightly more likely for runners than catchers. In all types of plays, the typical injuries sustained were similar in severity. However, the type of injury sustained differed by location. For outfield throws, the most common injury was a fracture. For double play attempts and plays at home plate, dislocations and sprains were most common.

Home plate collisions are more dangerous than other baseball injuries for several reasons. In most cases, these collisions occur with one highly-motivated individual running at full speed toward home plate. This runner collides with a catcher who is fully outfitted in protective armor. This combination creates the ideal circumstances for injuries to occur.

How the Ban Will Help

The proposed ban would require the catcher to stay out of the baseline and touch the runner only with the ball in his glove. If this ban is enacted, it could help to prevent some injuries during baseball games.

Even with the ban in place, injuries are still likely to occur. If you have suffered an injury while playing baseball, getting the right treatment is essential. Please contact Southeast Orthopedic Specialists to make an appointment today.