Should You Get a Bone Density Scan?

Bone density scans determine how strong your bones are and if you’re at risk for osteoporosis, a condition that makes your bones weak and more likely to break.

Bone density scans, also called bone mineral density (BMD), are noninvasive and take just a few minutes to complete. Scans can be conducted on your hips or spine using a scan called Dual Energy X-ray Absorptiometry (DEXA). It’s similar to a traditional x-ray, but your body isn’t exposed to as much radiation. A smaller device can also determine bone density using your finger, wrist or heel. Oftentimes, these devices are used at community screenings or in drugstores that offer bone density scans to patrons. 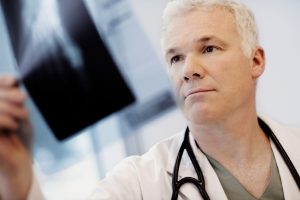 How Is Bone Density Measured?

Once the scan is complete, your orthopedic doctor will compare it to the average bone density of younger adults of your same gender and ethnicity. You’ll get two results:

With either score, a negative number means your bones are thinner than they should be, and the lower the number, the greater the bone loss. A “T score” of less than -2.5 more than likely means you have osteoporosis.

Should You Get a Bone Density Scan?

In young women, estrogen keeps your bones dense and strong. However, after menopause, estrogen levels in your body decrease which causes your bone density to decrease, too. In the first decade following menopause, a woman can lose a quarter of her bone density.

Therefore, many doctors recommend bone density scans for any woman older than 65 years old as well as younger postmenopausal women who have certain risk factors like:

If you think you’re at risk for bone loss, contact our Jacksonville orthopedics office today. We can refer you for a bone density scan and recommend ways to prevent bone loss.